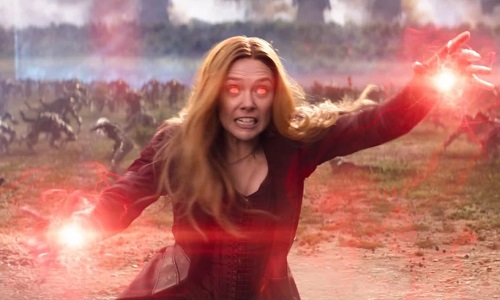 Ralph Bohner is a “boner” joke. Did you not get it? Here, I’ll explain it for you.

When a man gets an erection, it is sometimes colloquially referred to as a “boner.” Boner, unequivocally, is a pretty funny word. Not that penises are serious anyway, they’re all pretty stupid looking. But the term “boner” captures that stupidity and amplifies it to the nth degree, and is often used as a punchline for a joke. It also sometimes means “a mistake,” or something that’s gone wrong. But mostly it refers to the first thing I mentioned.

Anyway, Monica Rambeau (Teyonah Parris) is captured by Fietro, who is now a total stoner dude complete with a smoothie machine and a severe fandom for Steven Seagal. It’s all very funny, and even though he still seemingly has Quicksilver’s super-speed thanks to the witchcraft of Agatha Harkness (Kathryn Hahn), he’s not a serious threat. Pretty quickly, in fact, Monica gets the better of him, knocks him down, and removes the magical beaded necklace that Agatha is using to control him/give him powers.

Right before that, though, she discovers his headshot. Fietro is not a mutant, or even someone with superpowers. He’s the worst kind of human being imaginable: an actor. And not only that, he’s an actor named “Ralph Bohner.”

To drive it home, disgusted, Monica says, “Bohner?” And if you were wondering, you do not pronounce the “h.” His name is pronounced “boner.” Like a boner. Pretty funny stuff.

This also establishes that Evan Peters is actually playing the “husband Ralph” that Agatha/Agnes has been referring to all season long, the one that’s seemingly been off-screen. Whether that means he has in some way been in cahoots with the centuries old witch all along? Well, probably not. We’ve seen Agatha manipulating him like a puppet in the closing credits banger “Agatha All Along,” and as we’ve just said, he’s an actor. Unlike the headshots shown off by Jimmy Woo (Randall Park) a few episodes back that explained who the “real” people in Westview were, this is not a town populated by failed actors, like most of the rest of New Jersey in real life. This is a regular town that just happens to have an actor living there, and his name is Ralph Bohner.